Stough Canyon marked my first mid-week hike. After going two days in a row Memorial Day weekend, I had full intentions of doing another short hike the following Sunday. When the day came, my foot was feeling a bit achy, so after a chat with my hiking buddy we decided it would probably be best not to push it too early. While I was thoroughly irked about skipping a whole weekend, I’m glad I did, because not only was I well rested for Stough Canyon, but I’ve since done that other hike we were going to do, and it was strenuous, indeed. I probably would have hurt myself.

This one was also sort of spur-of-the-moment, planned just the day before. My mother-in-law would pick the kids of from school, which gave me the opportunity to do a short hike after work (which I really should have mentioned to her so she didn’t bring the kids home to an empty house. I’m sorry!!). I just needed buddies. Brian and Gina decided they would come along, and between Brian’s pulled hamstring, Gina’s turf toe, and my recovering fracture, what a trio we were! Haha

We left after work, and it was luckily pretty easy to find (no thanks to Apple Maps!). I think we got there somewhere between 5 and 5:30 p.m. and, personally, I thought there would be more cars in the lot. But hey, I’m not going to complain tons of free parking! The Nature Center was already closed for the day, so I figured I’d get some pictures on the way back so we could get going. The ascent began.

The trail is a well-maintained fire road, and marked pretty well. Any confusion we had came from trying to follow the map I copied from the book, but it just wouldn’t be a “60 Hike” otherwise! I always try to follow the trail as closely to the book as possible, and this seemed to have quite a few interconnecting and crossing trails, which made it a little confusing. Since we went in the afternoon, the setting sun allowed for pockets of shade along the trail, but I can imagine it being very exposed earlier in the day, which is something you want to prepare for. The trail gains something like 600-700 feet in the 1.2 miles to the turnaround point, which is described as a “gradual incline”. Now, when I hear “gradual incline”, I take that to mean “you won’t notice you’re going up”. I noticed big time. And I am well aware that it’s because my overall fitness level has basically tanked over the last few months, but, man, I got winded. This is one of those hikes I’d like to do again in a few months to see if it’s gotten any easier for me.

One very nice touch to this trail is that there are many places to stop and relax courtesy of donated benches placed along the way. They allowed for different opportunities to take a breather and enjoy the wildflowers or the many views. And boy, were there many views. From various spots along the trail you could see for miles; Burbank in one direction, the 210 past La Tuna Canyon in another, the 5 freeway in another, and even the occasional take off/landing at Bob Hope Airport. In fact, I think the only thing this trail had more of than views, was lizards. They were EVERYWHERE! And they just kept scurrying out in front of us! No self-preservation instincts at all, which also explained the crushed one we saw on the way down 😦

I’m still not 100% sure that point we stopped at was the point we were supposed to stop at, but it certainly worked for us. We were welcomed by a large, beautiful tree and a bench, and even a couple of picnic tables. Views of the cities and freeways below to the West, and the rolling canyons to the East.

I’m not sure why, but this spot stuck with me. Maybe it was the location, nestled between calm and chaos. Maybe it was the peaceful time of day, as the sun was getting closer to setting. It may even be that this was the first hike I said Hi to my dad on, which is painful to acknowledge now with Father’s Day less than a week away. I wanted to find a way to include him as I continued trying to meet my goal. While it doesn’t feel like enough, this is the best I could come up with. 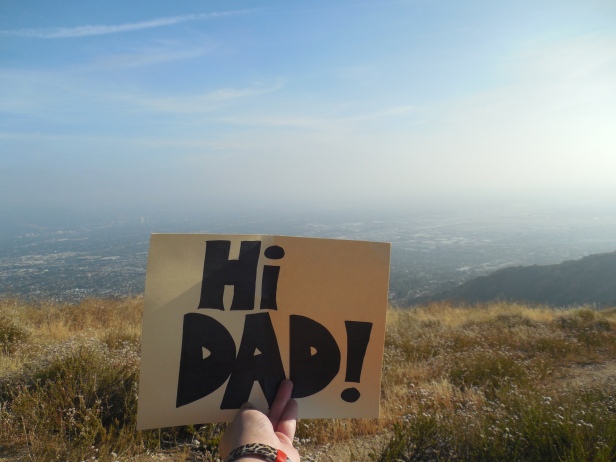 After Brian did some exploring and we took the mandatory hiking-buddy selfies, we started back down the trail. Of course, this part was a piece of cake. So along we were strolling, not a care in the world, when Gina, who  was between Brian and I, stopped, threw both arms out to her sides and exclaimed “SNAKE!”. It didn’t register with me right away, but sure enough, just ahead on the trail, was big ole chubby snake, at least 4 to 5 feet long, stretched right across our path. They said it was a Gardener (Garter?) Snake, but what the hell do I know? Brian snapped a picture as it was about halfway into the brush, and I was able to zoom in after it slithered off to safety. That was my first wildlife encounter I can remember having on my hikes. Not counting squirrels. 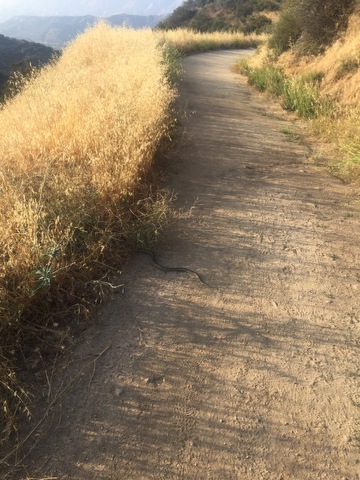 The hike down was quite a bit chillier, especially as the sun worked it’s way down as well. It wasn’t too bad, though, as long I kept moving. For the duration of the hike we were kind of wondering why it was so empty, or least noticed how empty it was. Apparently we were the early birds, because we passed a bunch of people heading up as we were heading down, and the parking lot got packed. We took a quick look around the nature center, peeked through some windows, the usual. It actually looked pretty neat inside, and I had read on the website that they do a lot of guided hikes and offer different camps and programs, things that really sounded worth a closer look. But, we were done for today. 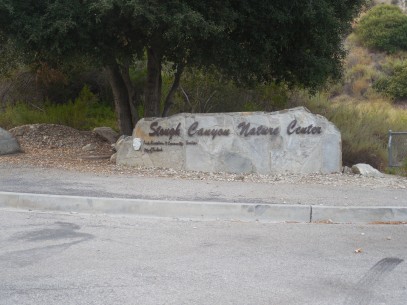 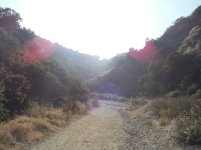 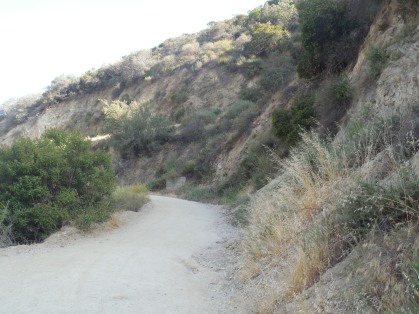 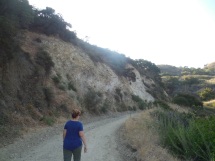 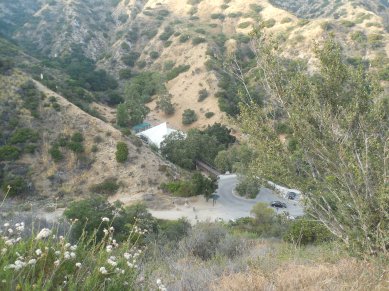 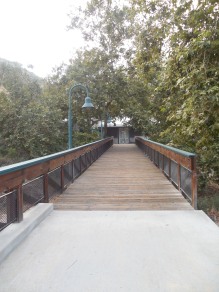 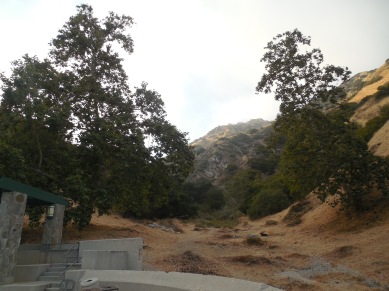