Once again, I am insanely behind on my posts (I just finished hike #23 last night). I know I’ll look back and totally understand why, but it still makes for some murky recollection, and I’ll be mad at myself no matter how justifiable it is. Still, let’s see what we’ve got…

Cherry Canyon was another after-work hike destination,  but luckily that freeway is usually pretty clear, even at that time, so we still made pretty good time. It took some winding roads to find this trail (that has very limited street parking in a residential area, FYI). The trail head sits on the side of what could easily be considered a person’s very long driveway, and starts off on a downward slope into a nice little shady grove. I’m a sucker for some sunshine poking through trees and over hilltops, so I snapped pictures left and right through here.

This, my favorite part of this hike, was short-lived, as we soon came to our first fork, trading the serenity and gentle shade for steep climbs in full sunlight. What a harsh transition. Made harsher by the severity of some of these climbs that I had absolutely no warning of.

I did my best to navigate the trails at the point, but nothing was making any sense. Cherry Canyon Park is one of those that is comprised of many different intersecting trails. Unfortunately, none of those are very clearly marked, so it’s incredibly easy to make a wrong turn. Which we realized we did.

Before we started the hike, I fired up the All Trails app I recently downloaded and successfully used on previous hikes, but for some reason I couldn’t get it to track our progress this time. Turns out, I had forgotten to turn Location on. It was a new phone. Mistakes were made. Our path was supposed to be a loop beginning on the Owl Trail, crossing over to Liz’s Loop, meeting up with the Descanso Motorway for an Out-and-Back, hooking up with the Cerro Negro, and taking the Cherry Canyon Fire Road all the way back. Instead, took the Owl Trail to the very vertical Cerro Negro, then the Descanso Motorway Out-and-Back, then the Cherry Canyon Fire Road to the beginning. Not once did we even touch the Liz’s Loop trail. But I digress…

After recovering from the most strenuous of detours, we were at least able to enjoy some of the views, which also helped distract us from the fact that we were still pretty much at the beginning of our hike. After traipsing our way along the (wrong) path, it finally let out into an intersection where SIX different paths converged. It took a hot minute to figure out where we needed to go next, but we did successfully find our next trail, and I also felt a lot less bad about going the wrong way to begin with. The world needs more trail markers.

We started on the Descanso Motorway for the out-and-back portion of the hike. There were some amazing views, but I think my favorite part was the flock of baby Quail!

From what I’ve learned, this trail used to empty into the back of Descanso Gardens, or used to connect with another trail there, I’m not sure. It’s closed off now, that’s for sure, which made for an underwhelming turnaround point for our hike.

After spending about as much time as you can admiring a locked gate at the bottom of a hill, we began our backtrack down the motorway. At one point, we were strolling along, chatting about whatever, when I happened to glance to my right and saw a man rushing towards me, inches from my face. I jumped and SCREAMED and just about had a heart attack…it was a trail runner who, I guess, mistakenly assumed I heard him coming. He felt terrible, lol, and apologized profusely before jogging along his way, with his female companion following behind him. It took a couple of minutes for my heart to come down from that one, and think Brian had to recover from thinking I was being attacked, too, haha. Wear a bell, people. 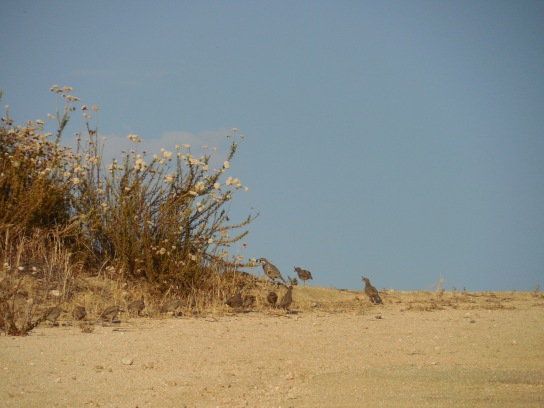 Having taken the wrong trail in the beginning, we had our choice of which one to take to finish things out. We opted for the Cherry Canyon Fire Road (the trail we were supposed to take coming in). It was an easy walk back, with views of the canyons and lots of shade courtesy of the setting sun. The “parking lot” snuck right up on us, we didn’t realize how quickly we’d made our way back. Since we had regained our bearings and had some leftover time and energy, we decided to go through the shady grove at the beginning again and try to figure out where we went wrong. After studying the directions from the Owl Trail given in the book (which we both concluded were a bit confusing for a first-time visitor), we found where we should have gone right instead of left (the path up the steep trail). This path was much more inviting, and as we connected back over to the Cherry Canyon Fire Road, we found it:

See, the whole way down the Cherry Canyon Fire Road, we were trying to find where it joined up with Liz’s Loop, and saw nothing. It wasn’t until we were walking up the trail that we saw the lone little sign, and the easily missed upward path that begins Liz’s Loop. Ugh.

Still, at least we figured it out eventually, haha. I’ve thought about re-doing this one, since we got it pretty wrong, going by the book, but ain’t nobody got time for that! I’ll barely finish the new hikes I have to do in time. So, I’ll appreciate this one for the learning experience and adventure it turned out to be, which is kind what this whole thing is about anyways. ❤