Memorial Day snuck up on me, but the timing was perfect. I have A LOT of catching up to do, and there was no question that the extra day in the weekend was going to be put to good use. It wasn’t just my holiday, though, and I did want to spend it with my family, so if I was going to drag them on a hike, I figured I’d try to choose a pleasant one. I resorted my hiking spreadsheet by “Total Length”, listing them in order of increasing mileage, thinking it would be a good idea to stick to shorter hikes until I got stronger. From there, I narrowed it down by Difficulty and Exposure, looking for something easy and, hopefully, shady. The Peter Strauss Ranch seemed to hit everything I needed to help make it a nice little family outing: 1.5 miles, Easy, and Mostly Shady. We would do a little hiking, have a little lunch, check out the grounds, and be home before it got deathly hot. And apparently it has a peacock! Just roaming around because it loves there! It was a good plan.

What I forgot to do was add a good two or three hours to my timeline because we can NEVER seem to get out of the house on time. It was already past lunchtime by the time we got there and we were starving, so we stopped to eat first or the kids never would have made it. Finding it wasn’t too hard, but I felt like it could also be easily missed on the first try. The lot isn’t terribly big, and the book warns that it’s often closed so parking could be difficult, but we went on a good day because it was open and nearly empty. I was a little worried it might be busy because of the holiday, but I guess everyone else was busy at beaches and barbecues, because we hardly saw anyone else the whole time we were there.

I  try to follow every trail as closely to the book as possible. While the rest of the ranch connects to the parking lot from the back, we followed the map toward Mulholland and walked across a bridge over Lake Enchanto, and could already hear the peacock honking! I always love encountering bodies of water on my hikes, and got excited when I saw this one through the Eucalyptus trees, but as the trees cleared, it wasn’t as reassuring as I’d hoped.

See? Blech. But we could still hear the peacock honking away so I visually scoured that swampy mess hoping to catch sight of it. ::Sigh:: no luck. We went along right to what I think is the main entrance, marked by a stone tower to the left and a sign to the right. The property immediately opens up, with the dirt road widening ahead and to the left, housing the cactus garden, and a large grassy field to the right. I started wishing we had brought a Frisbee or a kite or something, because there was a lot of space to play. There was a small collection of picnic tables under some trees, and beyond that was the ranch house. Before we started exploring, though, we had to break for lunch.

Newly rejuvenated, we took a look at the ranch house first. Unfortunately it was closed, but you could see a lot through the windows. I was hoping it would be more “old fashioned”, but it really just looked like a modern house with some vintage stuff here and there. We passed the (empty) aviary and the amphitheater, which looked kind of cool, and apparently they host free concerts there.

The trail itself is a very pleasant one, especially having it pretty much all to ourselves. We were worried about the heat, but the temperature stayed cool and breeze kept blowing through making it a perfect day for a family hike (where smaller humans may not hold up so long in the heat). The shade certainly didn’t hurt, either. Much of the path was a sort of patchy tunnel of tree branches, and every so often they would open up to a view of all the big expensive houses off in the distance.

This is about the time I learned I wore the wrong shoes. In case you haven’t yet figured it out, I have finicky feet. When I finally find the right combination of things that work for me, I have to stick with it or bear the consequences (like a fracture). In this case, it’s my Merrell hiking shoes and Carhartt low-cut socks. I don’t know why, but they are perfect together on my feet. Sadly, I had just gone hiking the day before, so the socks were dirty, and my other socks dug into the side of my baby toe in my shoes. So I had to wear my cross-trainers. The same cross-trainers I fractured my foot in. I should really just throw them away. This hike taught me how much I need the structure of a shoe designed for hiking and rocks and trails, because the shoes I wore were not nearly rigid enough along the bottom, and I swear I felt every rock I stepped on. Every. Single. One. Which really isn’t cool when you’re regaining your strength after having the arch of your foot literally screwed back together. My ankle hurts sometimes, too. I’m not really sure why.

We took a lot of rest breaks, for me and for the kids, but my poor son just still can’t hack it, haha. We reached the point in the trail where it comes to a T, and we go right, do a little up-and-back, then head back down to finish the loop. I struggled with whether or not to keep going, because while I try to do the trails as completely as I can, I wasn’t feeling my best either. Not as bad as Aliso the day before, but still not great. Chris took the son down to finish the loop, and at my daughter’s urging, she and I went on do the extra 1/4 of trail. According to the book, we go right at the T and stroll along until we hit a chain-link fence, then turn back to finish it out. What the book didn’t mention was that there was a fork in the path just beyond the T, one path leading upwards, the other down, and both equally worn.

This might be a good time to mention that I am a bit fearful of the woods. I don’t notice it on most of my hikes because I’m with other people, and often the areas just aren’t “woody” enough to be scary. I blame Blair Witch (I also love Blair Witch, but it’s still why I hate the woods). On this particular day, I was alone with my daughter and on a sub-par walking foot, and the sense of dread was ever-present. We pressed on, taking the lower path, which helped because we could see the houses and mountains in the distance, so I didn’t feel so “lost in the woods”. I didn’t take many pictures along this path because I wanted to power through it and get back, and at one point we both heard a loud snap, like a think branch breaking, but we couldn’t tell what caused it. (At this point I was hoping she was spooked, too, and would want to turn back. She opted to be fearless. Damn it.) This whole portion, out and back, gave me the same feelings I had after reading Penpal. It’s creepy and sad and terrifying, and if you haven’t read it, the feelings are similar to those left by watching The Orphanage (and if you haven’t seen that, you’re doing yourself a disservice. It’s one of my favorite movies, though it’s sadly not streaming. I just checked for you…sorry.) I have no concept of distance, and I can’t trust my phone service track me, so I had no idea how far we had gone or had yet to go. Then, the most beautiful sight I could have seen at that moment…

I WAS SO RELIEVED!! We never did find a chain-link fence, though it’s possible it has since been taken down, but the trail opened right up to some boulders and many inhabited homes. I felt so much better knowing actual people weren’t very far. We doubled back, just as quickly because I wasn’t taking any chances, haha, and finished off our hike.

We never did find that peacock. 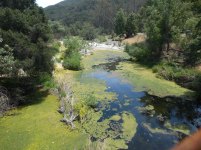 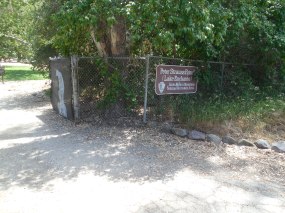 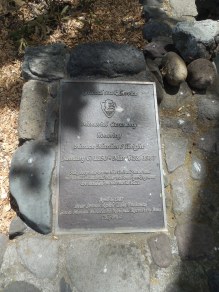 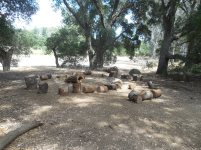 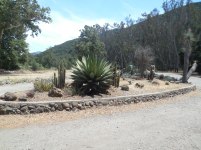 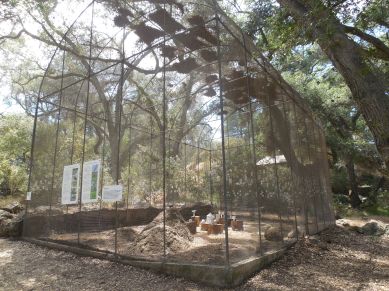 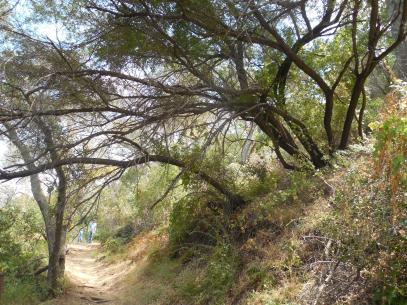 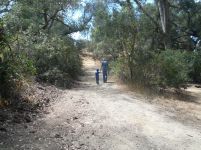 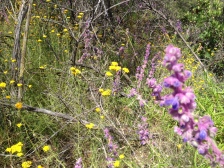 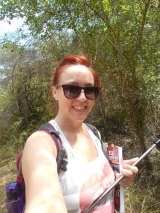 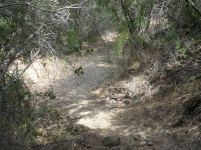 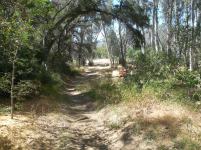 Seriously, what is this? 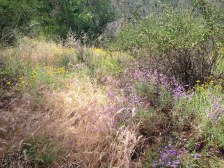