I think I’m burning myself out. Deukmejian was an after-work hike on a Friday night, followed by a group hike Saturday morning. Two hikes in 17 hours, and I never fully recovered, which is why I’m only now writing the entry, more than one week and yet another hike later. Let’s see what happens, haha.

Stough Canyon worked out pretty well for an after-work hike, so I decided to try to work more in while the days were longer and maybe even get ahead before it started to get cold. Deukmejian is one of three sites that have what I’ve deemed “tangent” or “bonus hikes”, or optional routes to change-up or lengthen the hike (not all of my Bonus Hike entries are completed from the book). I chose it for an evening hike because it’s a 2.6 mile Loop within a reasonable distance from work. After rounding up Brian and Kim, and adding Melissa to the mix, we all met up shortly after 5 p.m. to get going.

This one was a little bit confusing as we got started. There are multiple trails that intersect with each other at the beginning, and none of them are very clearly marked. I kept feeling like something was off because, according to the book map, our trail should have been heading straight up one way with the Dunsmore Canyon stream bed to our right the whole way, but there was only more land and trail. On the bright side, since there were so many trails (including at least two new ones that seem to have opened since the book was published), it was pretty easy to work our way over and get on the Dunsmore Canyon Trail we needed to be on. NOW it would be a straight shot to the first stopping point.

This first part of the hike was pretty easy to follow, which is awesome because it wasn’t so easy to actually walk. If you remember, Hummingbird was a learning experience in elevation gain, about 500 ft. over a mile. The gain was very obvious on that trail since we were basically hiking up the side of the rocky hill. This one was a little sneakier. It was more of an actual trail with bends and plant life that were clearly intended to distract you from the fact that you were gaining about 700 ft. over a mile. That. Is. A lot. Particularly for a rookie such as yours truly in June. Despite welcome pockets of shade, I even had those rare thoughts of “I shouldn’t have done this” and “(Finishing) 60 Hikes was a stupid idea”. At one point, I even thought I might be physically sick enough to throw up. After I thought about it, though, I could attribute that to not drinking enough water throughout the day before going out. Lesson learned.

That was the hardest part of that hike, and it was finally over when we reached our first turnaround point at a dam with a nice, shady little area. It’s a good thing I had so many people with me, because I could have rested here longer than I needed to. This very flattering picture sums me up at that moment.

And just for fun, here’s my boss climbing a tree! 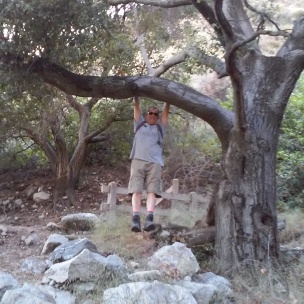 With the sun going down and the hardest part of the trail over, the rest of the hike was much easier to enjoy. We backtracked down Dunsmore Canyon a bit, then split off at a Y for the (marked!) Le Mesnager Loop Trail. (Sidenote: There is some interesting local history behind the Le Mesnager name and the barn that still resides there today. There’s a bit of it here.) It may have just been because we were now hiking in the other direction, but it seemed like this is where the views started to kick in. Like the previous trail, it was lined with different plants and wildflowers, but as we went, we also started to get little glimpses of the city in the distance.

Our next stop was the Le Mesnager Lookout, on a spur about halfway along the trail. We stopped for a photos and to soak in the view, but didn’t stay too long since we still had one more stop before finishing the hike.

We made our way to our last stop, Cooks Canyon Lookout, where the trail finally seemed to open up to views of the canyon on our right. We carefully climbed up the rock and had some (scary) fun trying to get ourselves positioned for a group photo before the 10-second timer on my camera went off. There was also this cool Geological Survey spike planted in there that, unless I’m reading it wrong, says the elevation is 1,965 ft., though the book says something like 2,600 ft. That’s a pretty big discrepancy, so I’m wondering if it means the year 1965. Google wasn’t much help here.

We finished out the last bits of our hike as the sun was going down. At one point we got a really good view of why we managed to get so mixed in the beginning, lol, and finished out among some wildflowers near a little well-kept park area.

It usually happens that no matter how much I struggle during a hike, I end up really enjoying it when all is said and done, and this was no exception. I felt like dying during the first leg, haha, but I had to finish, and it was well worth it. Another hike in the books. 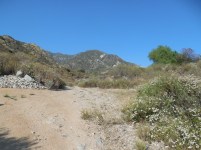 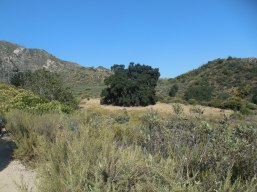 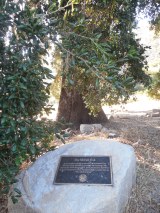 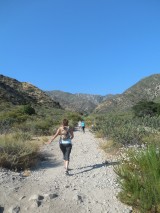 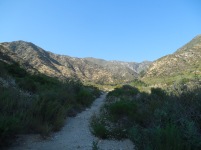 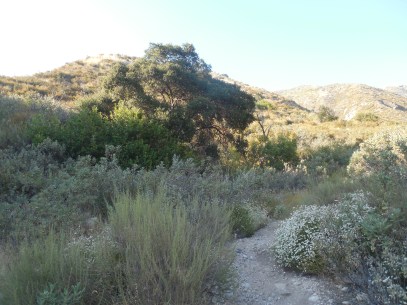 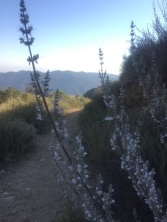 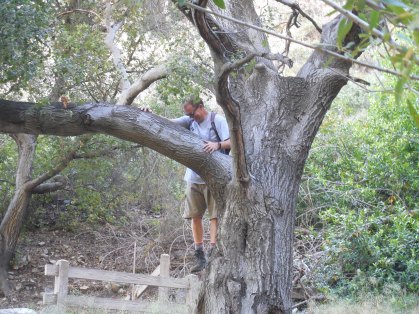 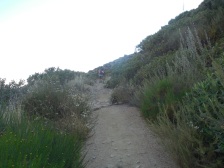 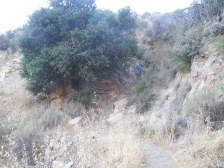 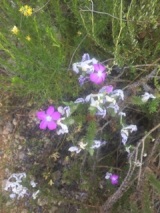 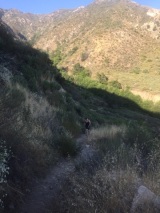 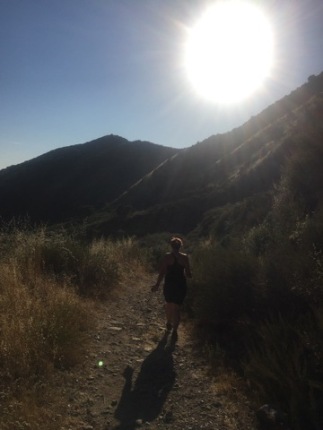 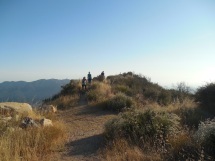 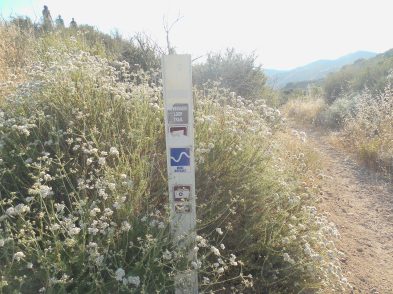 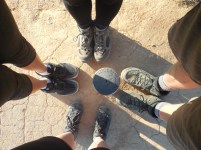 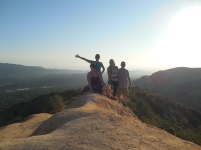 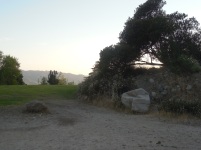 One thought on “11/60: Deukmejian Wilderness Park”