Sunday marked our January group hike, and it was a good one. It feels like so many little things came together and made it a great day. While our rainy weather had me worried, God let the sun shine down enough to warm things up and dry out the trail a bit, and the rain gave the creek a surge of life that made up for the dried up waterfall hikes we’d ventured on before.

I prefer to hike on the early side, like 8 a.m., though I can be flexible. I’ve found that it seems to be sweet spot where it’s not too cold and not too busy (trails or freeways!), and if the hike takes an extra hour or two, it’s still not too hot by the time it’s finished. Of course, this means I have to get up at 6 a.m., and that grosses me out, but it’s totally worth it. So Danielle, Andrea and I made plans to meet at Malibu Creek State Park at 8, so to leave by 7 I set my alarm for 6. Imagine my horror when I woke to my alarm at 7 on the dot, which was my leaving time. I still have no idea how I slept through my alarm for an entire hour, but I fully suspect NyQuil had something to do with it. :: I still feel really bad about that, sorry, ladies! ::

I finally made it to the park at 9, and I was already feeling good because the drive was familiar. Our December hike in Solstice Canyon was just a few miles farther and on the PCH. Parking was $12, but as you know, I’ll pay close to anything for peace-of-mind parking. Also, it’s a state park, so I don’t mind giving them my money, especially after seeing how well-maintained the trail is. I met up with the girls and we got going. Even the entryway was calm and inviting.

After a short walk past the human rabbit hole, I began to hear a strange, yet familiar sound. It was soothing, and grew louder as we walked. Then it dawned on me: WATER! There was water flowing nearby! I loved it. Aside from the recent group hikes, I don’t get out much. I don’t get to go on many trips, even to the beach, so this was a ridiculous treat for me. We crossed the concrete bridge and got our first look at Malibu Creek. This trail was already offering sights no other trail had been able to, and we’d barely even walked! 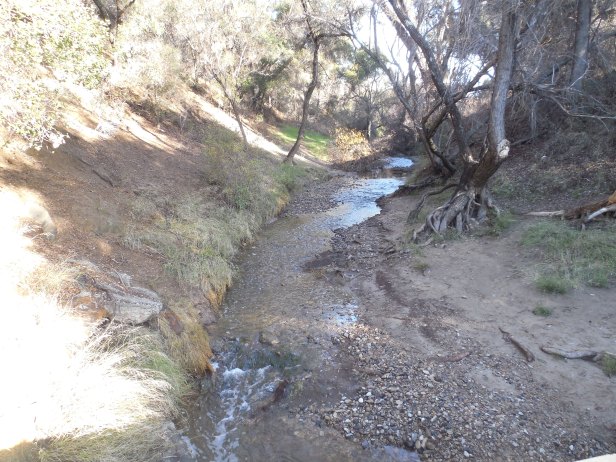 The trail is pretty simple. I can say  that now that I’ve navigated through it, but I felt some pressure to not take a wrong turn and miss our destination. Instead of bringing the book, this time I remembered to make copies of the map and trail description. I was NOT going to mess up my second hike, too! I was constantly referring to those copies, even though it’s really just Crags Road from start to M*A*S*H*. A good 5 miles total, out and back. It helped that Crags Road largely followed the creek, and, even though there weren’t really any “high up” views, easily made it the most scenic hike I’ve done. It surprised me how soothing it was to walk along the creek, and there were trees that lined the road making it shady and beautiful. There was also a bird doing yoga. And a serial killer shack. 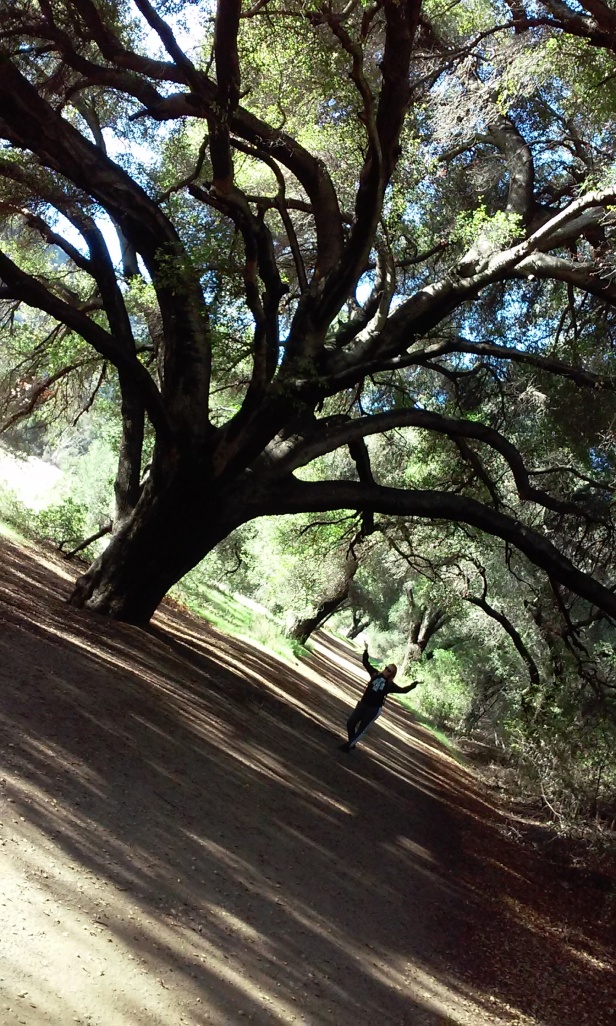 Soon after came the mud. It was weird. It was sticky. I don’t remember who said it, but she pegged it when she said it was like clay. It clung to your shoe with every step, yet managed to be slippery, too, and, for an added bonus, was mostly uphill. So that was fun. As more layers stuck to the bottom of my shoes and, I guess, created more suction, I noticed my heels lifting out of my shoes a little with every step. I could feel my heels rubbing against the insides of my shoes and had a twinge of “Oh no, not again”. But, nothing! Not a single blister, not even a sore spot. I fell in love with my new shoes a little more 🙂

We came to another bridge, and the creek was flowing strong! Once again, I was so happy for the timing and that it rained just the day before. Of course we had to stop for pictures 😉 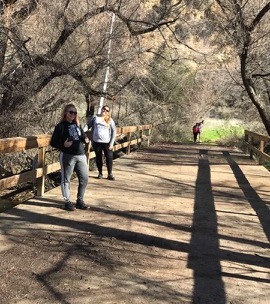 Then came my glorious moment of validation… 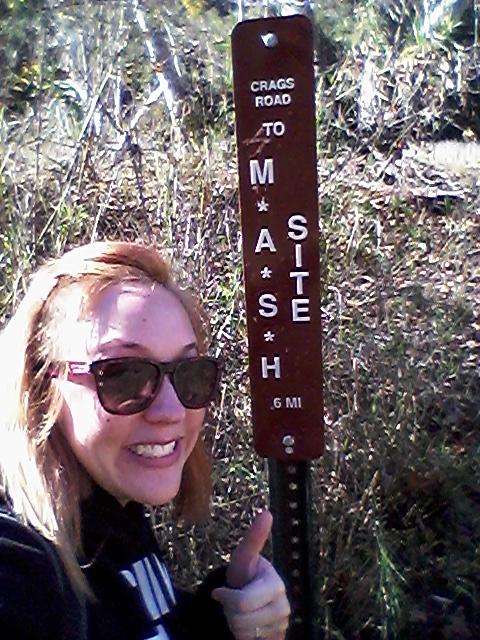 I can not tell you how relieved I was to know I wasn’t getting my friends lost. Seriously.

I didn’t get any pictures of the next bit, but I wish I would have. We basically had two options: ankle-deep in flooded trails, or cautiously tread over big loose rocks. We mostly went with the flooded path, but managed to take our time and skirt the puddles. One puddle had big muddy rocks sticking out above the surface. It was very “Bog of Eternal Stench”. Eventually the path evened out, and there weren’t so many puddles to jump. Then, all of a sudden, we had arrived.

The first of two former prop trucks used while filming “M*A*S*H*”. Oh, I guess I should say a couple of things about why it’s called the M*A*S*H* Trail. Fox filmed M*A*S*H* here. Well, not just M*A*S*H*, also things like “Fantasy Island” and “Butch Cassidy and the Sundance Kid”, according to the book. Just past the ambulance is a large clearing where we found the other former prop truck, looking MUCH worse for the wear, a shed with pictures from the show, and a line of picnic tables under a mesh covering, perfect for taking a break and enjoying the destination. I don’t know if the shed and the many picnic tables are newer additions or not, but they aren’t mentioned in the book, so that was a cool bonus. We also checked out some informational plaques and a replica of the iconic signpost. (The real one is being cared for by the Smithsonian at the National Museum of American History)

After a short break, we followed the book tip up a small hill to an area that was once used as a helipad, but with no remnants of it ever having been used, it was just a large empty space overlooking the M*A*S*H* site, which wasn’t bad either. We made our way back, this time opting for the loose rocks, which really weren’t so bad. The second time across the wood-rail bridge had an even fuller creek than before, and the sun was out long enough to dry the clay mud a bit. We did take a small detour to Century Lake on the way back. After another short and beautifully shady little walk, we found the lake and the dam, which I didn’t know was there. It was a pretty little spot with another picnic table, and a, I don’t what to call it besides a short catwalk, short catwalk to the edge of the dam. We stopped for a photo-op in front of the lake, but as cute as we were, we were shown up by this dog that couldn’t keep from jumping in the water, even though it was too muddy for her to get out on her own. And even though she had to let go of the stick to get out, she made sure to rescue it before she walked away. I wanted to snuggle her.

Here’s a good transition, see that bridge-looking thing in the back? That’s the “catwalk” I was talking about. There’s a ladder there that goes straight down the other side, onto some large boulders. From what I can tell after some Googling, you can scale the gorge along the water to the Rock Pool and back, and even go swimming. It looks pretty cool. As we were taking a look at the water flowing over the dam, a group of hikers showed up and headed straight for the ladder. I didn’t know the gorge was down there at the time, but I can only assume that’s what their plan was. What I did know was that they had two small dogs with them that they apparently planned to strap into their harnesses for the ride. It made me too nervous, I wanted to leave before something bad (almost inevitably) happened. So we took another route back to Crags Road from Century Lake and eventually came across the Visitor’s Center. It was about 10 past noon, it had just opened, so we decided to check it out. The staff was very kind and welcoming. There was a lot of different taxidermied pelts and animals natural to the area, and a hall full of photos from movies and TV shows filmed there throughout the years, including the entire town of “Pleasantville” that was built on the lower parking lot. I love stuff like that, so I got some kicks in there, haha. They also had a small theater and book section, with “60 Hikes…” on display. I almost said something about my little project, but I didn’t want to sound braggy or anything 😉

The Visitor’s Center was our last real stop. We made our way back, ignored the fact that the door to the serial killer’s shed was now CLOSED!, had to make a U-turn due to the creek flooding out the path, and we were done.

I wish I had taken more pictures, or that I could express myself more fully, because I’m having a “doesn’t do it justice” moment with this whole post right now. My heart was in this one. I don’t think there was a single moment where there wasn’t something beautiful or interesting in sight. I may have been referring to my copies a lot of the time, but I was in the moment, and loving every second. I’m so glad I got to share that one with my favorite hiking buddies, Danielle and Andrea, and thank you ladies for sharing and taking some of these pictures for my post! 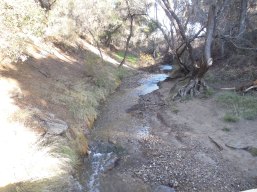 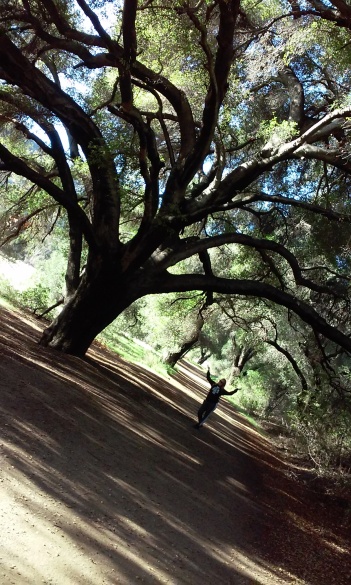 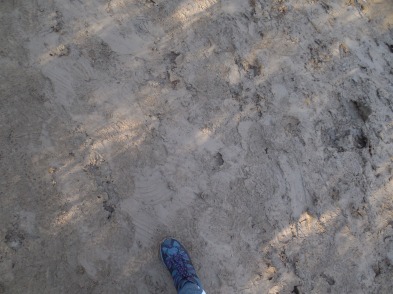 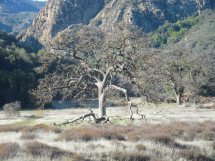 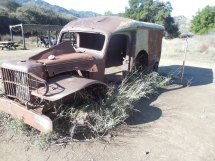 “Rust Bucket” was never so accurate 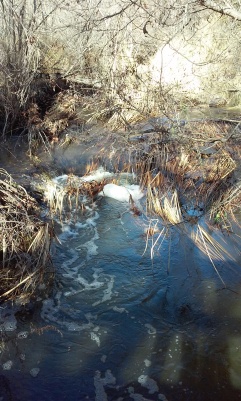 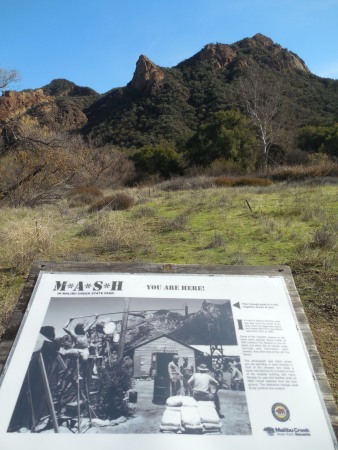 The spot where the M*A*S*H* photo was taken